The speakers for Hawkeye on Safety 2020 are currently being determined. 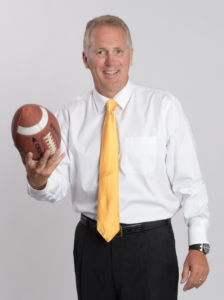 Born in Norman, Oklahoma and raised in Wheaton, Illinois, Chuck’s been synonymous with University of Iowa football for more than thirty years.

He starred at quarterback for Coach Hayden Fry and the Iowa Hawkeyes from 1981-85. He took snaps in five bowl games, holds every Hawkeyes’ passing record, played in two Rose Bowls, finished runner up in the 1985 Heisman Trophy voting and was selected by Detroit as the 12th overall pick in the 1986 NFL draft.

Chuck went on to play eight years of professional ball – seven with the Lions and one with the Los Angeles Rams. He then embarked in 1995 on a 16-year coaching career, first as the defensive backs coach and then quarterbacks and special teams. He also spent time with the country’s other top college football programs including the University of Oklahoma 2000 national champions.

He was inducted into the College Football Hall of Fame in 1999 and is an inaugural member of the Kinnick Stadium Wall of Honor. Chuck currently serves as the CEO/Executive Director of the Iowa Sports Foundation and an analyst for the Big Ten Network.

He and Aaron Putze of Waukee, Iowa, co-authored Destined for Greatness – the Story of Chuck Long and Resurgence of Iowa Hawkeyes Football. And just this May, the pair teamed up and published YOU Are Destined for Greatness. It features  stories of inspiration and empowerment perfect for personal and professional growth as shared by Chuck, Kirk Tyler, Bruce Harreld, Miriam Erickson Brown, John Campbell, Kirk Ferentz, Hayden Fry and many others with Iowa and Midwest roots. 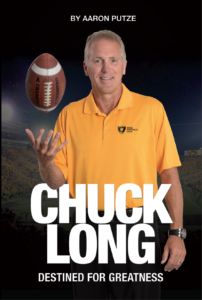 Register for Hawkeye on Safety

Registration for Hawkeye on Safety will open February 1st. At $45 per person (or $35 per person for groups of 10 or more), your registration will include meals, refreshments, parking, and automatic entry into the door prize raffle.

Register to Attend Hawkeye On Safety 2020

Help us provide Iowa workers with life-saving health and safety education. Click here for information on the benefits of being a sponsor or exhibitor.

Register to Sponsor Hawkeye on Safety 2020